How do solar cells produce electricity?

PV Cells were first used to provide power onboard space crafts. Since then the technology has advanced, its reliability has improved and its cost has declined. Solar panels now provide electricity to private residences and the grid.

PV Cells capture the electrons freed when certain materials absorb light and, in the process, convert light energy into electricity.

When sunlight hits the PV Cell it is absorbed by the semiconductor material. The absorption of sunlight pushes an electron free of the electric field. Metal conductive plates on both cell layers and a wire connecting them form a circuit which allows the ‘freed’ electrons (e-) to flow as DC electrical current. The electrical current can be used to power things on site, stored or connected to the grid (load).

The electrical current produced is dependent on how much sunlight is absorbed. As silicon is shiny and reflects sunlight, an antireflective coating is generally applied to reduce reflection losses. The electrical current together with the cell’s voltage (produced by the electric field) defines the power (wattage) that a solar cell can produce.

Finally, a glass plate is commonly used to protect the cells from the elements. 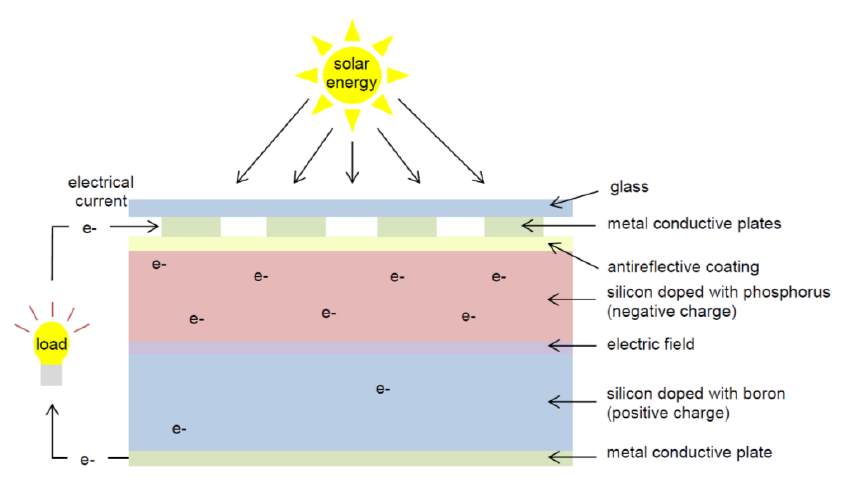 Diagram of electrons being freed by the absorption of solar radiation and captured by a solar cell.

resource energy and projects / resources and energy / solar / power / battery / electricity / production / modules / light
Authors
Jonathan Fulcher
Partner
Jonathan is a Partner and the head of our leading Resources and Energy practice in Brisbane and is also the leader of our Native Title practice.
+61 7 3024 0414 +61 418 106 227 j.fulcher@hopgoodganim.com.au

Blog
Should you audition your adult children for their...

Legislation update
How concerning is your Google review? The new...