Put simply, a hydrogen fuel cell converts hydrogen gas and oxygen gas into water and, in the process, produces electricity.

The Proton Exchange Membrane Fuel Cell (PEMFC) is considered the most promising system to power cars and other transport.

Pressurised hydrogen gas enters the fuel cell on the anode side. The pressure forces the gas through the catalyst (commonly platinum) which causes the hydrogen gas to split into two H+ ions and two electrons (e-). The electrons are conducted through the anode where they make their way through an external circuit (where they can power things) and return to the cathode side of the fuel cell. The anode has channels that disperse the hydrogen gas equally over the surface of the catalyst.

Meanwhile on the cathode side of the fuel cell, pressurised oxygen gas (O2) is forced through the catalyst which causes the oxygen gas to split into two oxygen atoms (O). Each of these atoms has a strong negative charge. The cathode has channels that distribute the oxygen to the surface of the catalyst.

The strong negative charge of the Oxygen atoms attracts the H+ ions through the membrane where they combine with an Oxygen atom and two of the electrons from the external circuit to form a water molecule (H2O).

This reaction produces energy which is captured and converted to electricity. This can be used to power a car or be stored.

The power produced by a hydrogen fuel cell depends on several factors including:

To increase the voltage individual fuel cells are combined in a series to form a ‘stack’. Bipolar plates are used to connect one fuel cell to another. 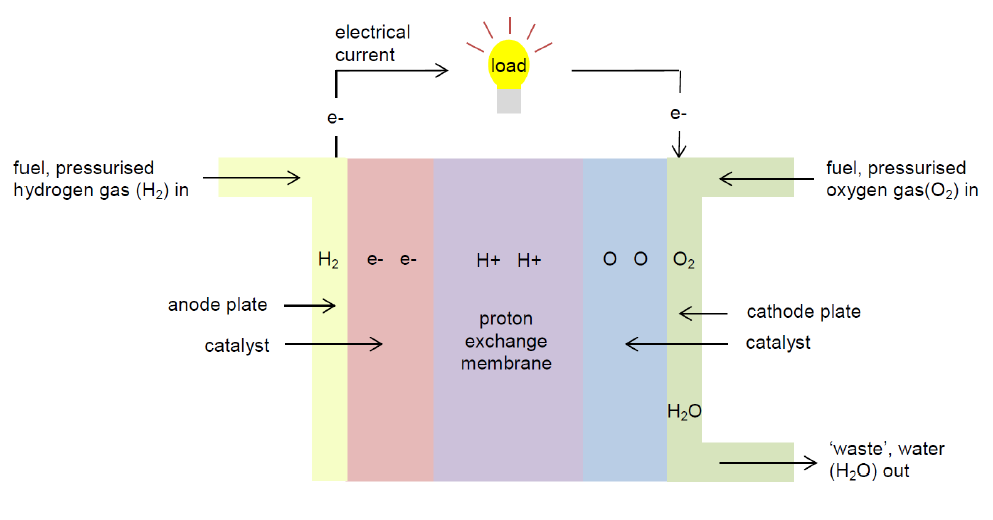